As you can see, we are having quite an experience over here. We are in a groove right now. We’ve gotten to know the people and have developed a mutual respect. I’ve been teaching endoscopy, seeing patients in consultation and giving lectures to the surgical residents and the nurses. 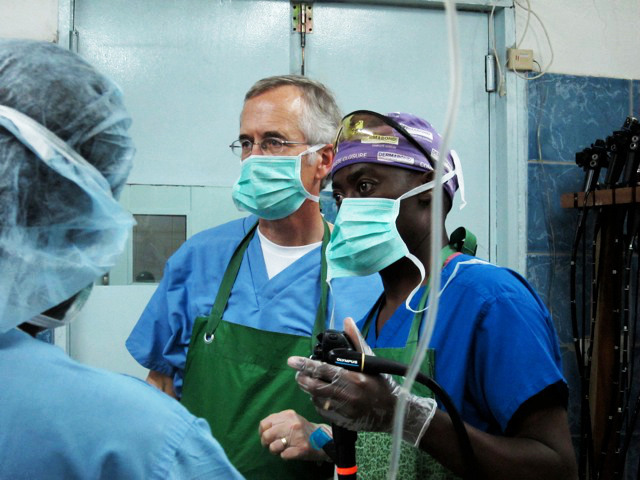 My day starts at 7:30 AM with devotional/prayer time in the conference room with the staff. It is in French, but I still enjoy the time. I’ve been working largely one on one with Dr. Ruffin Loua, a third year surgical resident from Guinea. He is a fine person and I’ve really enjoyed our time together. He basically knew nothing of endoscopy when we first started. I’ll be honest, it has been tedious and difficult. We have had to cover everything, from scope preparation, sedation and examination to clean up and procedure reports. Soup to nuts. Everything! He is a very bright physician and picking all up quite well. My hope is that if one of the residents can learn some techniques, he can pass these skills on to the others. The residents are great. I really enjoy them. Each day starts with corporate devotions and prayer. We pray with each patient prior to each procedure. Last Sunday I met with the residents and Keir as they discussed an outreach project to the community for the training year. The residents play soccer every Saturday morning on the soccer field, and may invite some of the Muslim store operators in Lebamba to join them. Marly has been busy sewing nursing student uniforms, helping one of the missionaries redo her drapes, and organizing the medical supplies. She even gave one of the 8 year old MKs (missionary kids) a “summer camp” to teach her how to sew! We’ve been invited to several missionary homes for dinner which has been super fun. But our little cottage comes with a kitchen and food so we are really self sufficient. There is no TV, but we do have a DVD player in the cottage and have watched some movies at night. As you know we have internet through a satellite connection as I’ve shown you in the photos. This is a Christian and Missionary Alliance mission compound that was established in the 30’s. It is located in a fairly remote interior part of Gabon, 300 miles from the capital city of Libreville but only about 50 miles or so from the Republic of Congo boarder. Our closest “city” is Lebamba on the other side of the Louetsi river, about a 5 minute drive from the Bongolo compound. It is a bustling metropolis of about 2,000 people. It is big enough to have some stores including a hardware and a couple of “restaurants.” We have visited the Barrack Obama restaurant a few nights ago. Tonight we will dine at another eatery with the Thelanders.

The big news around here is the fire at the compound. It occurred the week before we came. The news reached Bongolo Hospital’s praying partners prior to our departure from Dayton.

It started as an electrical fire in the storeroom for the medications. Dave Thompson was one of the first to arrive at the building. He grabbed the fire extinguisher from his car. That was good for about 10 seconds! Within minutes a “bucket brigade was formed and water delivered bucket by bucket put the water out.

A portion of the roof was destroyed, a lot of smoke damage occurred to the ceiling of the building and two refrigerators were destroyed. In all, about $7,000 US of damage. It could have been much worse.

The only medications lost were those in the one refrigerator. It was filled with hemorrhoid suppositories. As I told David Thompson, “What’s the story? They’re supposed to put the fire out!”

The government is going to reinforce and update the bridge to Lebamba across the Louetsi river. They started work this week. This is the famous bridge that replaced first hollowed out canoe transport and later ferry shuttle across the river.

The Minister of Roads for the whole country has a home in Lebamba. He met with Dave this week who apprised him of the project. Dave really likes this official. He says he has done more for the road system in Gabon in the last two years than had been accomplished in the 20 years before. Thanks to this minister, within the next two years the road between Libreville and Lebamba will be completely paved.

The Chinese government is working on this road project in exchange for iron ore, wood and other resources. It was so strange on the drive here to see Chinese workers and Chinese camps along the way.

The last bit of big news around here is that there will be a Presidential election in Gabon on August 30 to replace President Omar Bongo who died in June. 23 candidates are running, three of whom are going to make campaign stops in Lebamba today including the deceased Presidents son, Ali Bongo!

This area is very lush with tons of vegetation. Dave says that if they were to leave the compound, the jungle would probably engulf the place within five years.

For all of the wonderful growing conditions they have virtually no fresh vegetables around. When asked why there were no gardens I was told, “There’s just too much sun and too much water!” I guess too much of almost anything might be bad.

The time has gone by quickly. We’ve been “in country” 10 days now. We leave for Libreville in just four days to begin our journey home. Thank you for all of your prayers and partnering with us in this trip.